Arrived a bit late, I think I'm getting to the level of a lazy regular :P It's not unusual for people to show up half way through the session, so it's like "An hour late? Ah whatever... they'll still be at the med center... and if not, I'll find 'em in Jamba (Juice)." We go around the campus in kind of a predictable schedule.

In fact as I showed up they were about to leave for Jamba, but King suggested playing a quick round of follow the leader hot lava. He lead a really nice game, and anyone who touched the ground had drop and do 10 push ups. I think I ended up doing 50 or 60 total; sometimes I'd get too set on following what King did instead of finding my own way. It lasted 20 something minutes and worked me enough that I felt good about going to jamba juice after; it would have felt weird getting a drink if I hadn't done anything yet.

To my great disappointment we didn't do anything at Ackerman, King wanted to skip ahead to the new new spot (yeah not descriptive to those who haven't been there, but that's the only name it's been given). Did some precisions and apprehensively eyed the wall on which I'd bashed my knee a few weeks earlier. I ran and konged atop it a few times, but never went to go over; I want to strengthen my jump more so that the height isn't "just sort of" in my reach, it's "an easy clear by almost a foot." :P Say No to cracked knees.

At the new spot (the area above the new new spot) King directed a conditioning course. Sprint to here, then cat crawl to here, then traverse this, then duck walk under these, then do that ledge crawl there... etc etc. I thought it was a bit early to do a course like that, but I enjoyed the challenge and again saw where and when I lack in power :P But it didn't matter if we could fully do everything, King would yell out modifications on the exercises to us if we were struggling too much with something. "Touch the top if you have to, just get over it!" I've said it before but he's an excellent trainer.

"King! We brought you a present!" I yelled excitedly with our bounty in tow. Brian and I had run into the downtown LA group while we were getting water and their leader had agreed in joining his pack with ours for King's conditioning. A third of them chose to watch, leaving us a group of roughly 23. "Gonna be some traffic this time," one of us muttered. In traffic we have to hold a squat, plank, or push up position ;) "Or just do something," King explained. Once again King lead the group, and to my surprise we weren't held up too badly, people moved :) Quite a few of the downtown guys commented on how they really liked the work out and that they didn't do stuff like this enough. I was glad they enjoyed it and got the same good feelings I did out of it. We did one more course before the packs split, and ours headed off for the fountain.

"Heeeey dude where are ya?" I greeted Greg's call. We'd been phoning back and forth all day; he was coming but running super late. It was 4:30 and he still wasn't around. "You should tell him just not to come," King sighed. It sucked - none of us was planning to hang afterwards this session, we were all splitting at 5. Jo called him back to explain the situation, I felt too bad to do it myself, to tell him he'd come out this way to train or at least chill with us and neither was happening - It's an hour drive from his territory to ours ("But half an hour the way I drive," he'd snickered). Five minutes later my phone rings. Greg's comin anyways.

We hung around half an hour more with him before we started heading for the cars. "Let's do a run back to the med center! Come on," Greg pressed us. We looked at each other. We were still at the field below the fountain, it was a meaty distance, exactly what I'd been craving since Greg said he was coming. "Yeah, let's run!" I seconded. Greg seemed to have the same view of things as I did, which was PLAY TIME, EXCITED. He, Brian, Brian2, and I took off after bidding farewell to King, Jo, and Rick. He led us through the campus, zig-zaging all over to any obstacle that caught his fancy as I shadowed him as best I could, scrambling over things one way or another. "What the hell kind of a run is this?!" Brian shouted as Greg pulled circles in spots to vault things 3, 4 times at Ackerman and ran pretty much wherever he wanted. I grinned. It was pure inclination. Some people clapped as we looped a trail around Ackerman, probably thinking us some sort of troupe, and I smiled inwardly that Greg devoted a full 45 seconds to the place. 'I get to play here after all,' I beamed.

"See you next week!" I waved to Greg as he disappeared behind the med center wall. Next week is the second Socal monthly jam - It's in Huntington Beach, and it should be fantastic.

Oh, uh, yeah - here are the photos from the first SoCal monthly in San Diego:
http://www.pkcali.com/parkour_plugins/content/content.php?content.57
check it out, there are A LOT.

Comment by monk on July 14, 2008 at 10:40am
your fave pics are heavily dependent on the viewers imagination! ;) (or is it my computer not showing the images?) anyhow, those spots look absolutely amazing and beautiful. looks and sounds like so much fun... and a lot of work! 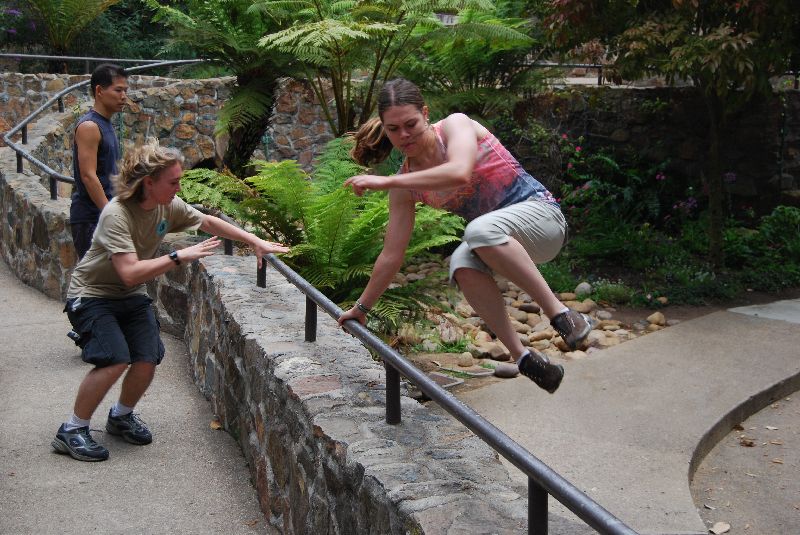