The Traceur Challenge is an idea that originally came from the Overflux community. Here is my version...

This first challenge is at USF: Kittredge Terrace and Golden Gate Ave. Hold on to the horizontal concrete with your fingers and keep your feet on the lowest ledge. This was my personal best so far. Now lets see some other people try it!


Find more videos like this on Bay Area Parkour
As you can see in this next video Lindsay made this look easy on her first try. We came to the conclusion that this is easier for women due to a lower center of gravity. So if you ladies want to make this more challenging, hold on one notch lower on the wall.


Find more videos like this on Bay Area Parkour

Permalink Reply by orem on March 28, 2009 at 6:50pm
oh! i'll try to make it out there sometime (with a camera), ledge walking is one of my favorite kinds of challenges :))

Permalink Reply by SafeNSure on March 28, 2009 at 11:03pm
I think that "the conclusion that this is easier for women due to a lower center of gravity" is totally irrelevant... how about tall women, i.e.?
I would instead point out that the female practitioner was heavily distracted, and was trying to focus under pressure.
;P

IMO, it's important (ok, not REALLY important...) to establish if the challenge has to be exactly the same for everybody attempting it (hence: no lower hold for female... tough luck, boys!), or instead it's about getting from A-to-B, given a certain path (hence: male can hold higher, which means hanging more weight to the ledge, or one can switch grip, etc.).

Also: another variable is shooting for time, or for distance... going faster or going further? Or a combination of both?

Permalink Reply by Just Steve on March 28, 2009 at 11:16pm
This is great! I really like this idea...keeps with my understanding of the orginal spirit behind Parkour. Anyway, I thought of 3 of them after this post. Two of which I saw others do, but I find extremely challenging. One, I do just for fun. I will post when I can...

Permalink Reply by Chris on March 29, 2009 at 12:19am
I wasn't really envisioning these having anything to do with time, but people can do it how they like. Going fast or slow there will come a point where you want to quit. The heart of this challenge is pushing past that point. Good luck!

Permalink Reply by Seng on March 29, 2009 at 1:33am
I like this idea, despite the fact that it may require a trip back to that wall at Minnie Lovie to travel that wall in various hand/arm supported positions.

Permalink Reply by SafeNSure on April 6, 2009 at 12:25am
..mhhh. Very good.
So, I tried it Saturday (meant to join a session there, but got late, and did just that and some other stuff at a park close to my house...), and I plan to go back, because, for my windsurf practice, there's never enough forearm exercise that I can do.

For the reasons mentioned above, I felt I wanted to try different techniques.
The only requirement was using only (or "as much as possible", i.e. passing the corners requires a bit of adaptation...) the 2 inches (or less) horizontal ledges for both hands and feet.

I tried three times, with three techniques, and of course I grew progressively more tired, even taking 5' recovery in between attempts. I realized that I didn't watch their videos well enough, because I had to make adjustments along the way, and MUCH WORSE, I had in mind that they both did almost two laps (!)... I cleared 32 panels (I fell after touching the wall, starting moving back; the end panels are really dusty, you don't notice that at the beginning, but it takes way more grip to hang on...).

That first lap almost shot completely my forward forearm, therefore I decided to go the opposite direction.
I remembered that apparently Lindsey was going quite effortlessly, maybe because of the lower COG, so I tried lowering mine by raising my grip:

You may also notice that I assumed a lateral stance with my feet; that's because, while it's true that female have in general their COG more backwards (thus theoretically sticking out, and weighting more on their arms), in this case they are helped by two elements: having wider hips they can easier keep a frog position and stay with their COG close to the wall, and because (be it physical or mental) they shouldn't be too afraid of hitting their groin doing the lateral movement as male may be... :)
Walking sideways took good care of that part, even if -being asymmetrical- worked better on one side than the other...
With this technique I went 44 full panels, and I was surprised of falling (a bit like Lindsey); my arms were way less shot... I had to adapt a bit since the horizontal ledge has more gaps at that level... 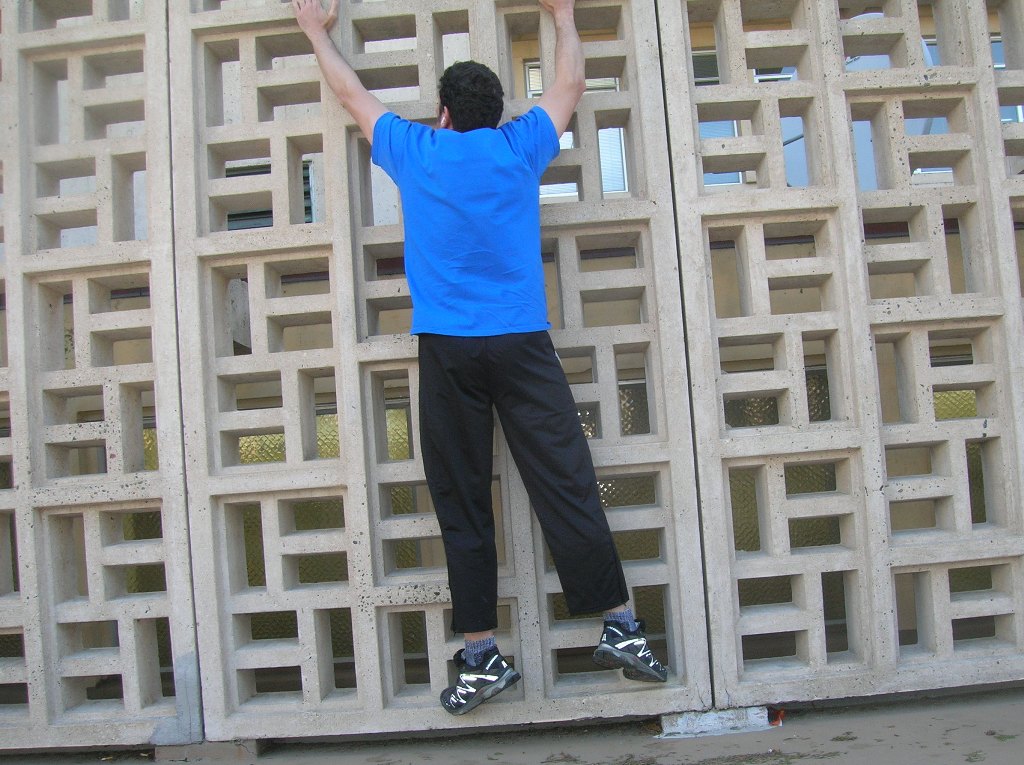 As you can see, I almost hang there.
Felt great, especially at the beginning, when I could almost hop from one foot placement to the other.
But I had to be tired at that point, and I didn't quite consider the friction on the fingers (due to the semi sharp edge), and I literally had to let go passed block #20.
Also turning around the corner got really tricky.

So: guess which one will be my first technique next time?
(There are also another couple of tricks -one being BREATHING!- but I'll let you figure them out by yourself...)
AWESOMENESS!
:)