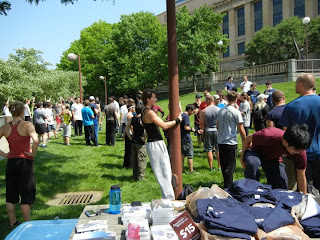 I am pleased to say, first and foremost, that we passed the certification course and are now certified by some of the most experienced parkour instructors in the world. The course was a 3 day long program, with two 8 hour days of instruction and a day of assessment, which included both a written and a practical exam. Even though we have both been teaching for several years ourselves, Blane (Chris Rowat) and Dan Edwardes had a lot to teach us. It was especially helpful after the practical exam to get the input of the instructors on our personal teaching styles and how we could improve from there.

One of the requirements for certification is 10 hours of supervised coaching, which we did at American Rendezvous. This was a 3 day event (Saturday to Monday) where over 120 traceurs of all levels descended upon Columbus to learn from and train under coaches from Parkour Generations and the founders of parkour, the Yamakasi. Most of them were within driving distance of Columbus, so there were a lot of people from the East Coast who I haven't had an opportunity to train with too much, and it was refreshing to see so many new faces who were enthusiastic about parkour. We had several intense training sessions including a visit to Hocking Hills State Park, Ohio State University, and the downtown riverfront.

Aside from the training, the event also had several presentations and special workshops on unique aspects of parkour, such as Julie Angel's parkour history talk (which we sadly missed because we had to catch our plane home). My personal favorite was by Dan Edwardes called "Breaking the Jump," wherein he talked to a group of us about the psychological aspect of parkour and overcoming fear. Although this is one of those things that is always touted as one of the philosophical underpinnings of parkour, I think that many traceurs, at least the ones I've met in the United States, overlook it in their training. He told us that there is a specific category of training that they do in Europe that was essential to the manner of training of the original Yamakasi, which was a sort of fear training - that is, finding a situation, a jump that is intimidating for whatever reason, and figuring out what it takes to push past it at that moment. At first, I thought, "We do this all the time, no big deal." But Dan said that a "true jump," or "saut vraille" in French, was the kind that no one has done before, that you don't get to prepare for, that you don't have an opportunity to find a progression for. Those are indeed rare. The workshop ended with each of us looking for a precision that fit the bill and trying to overcome it before the hour was over. 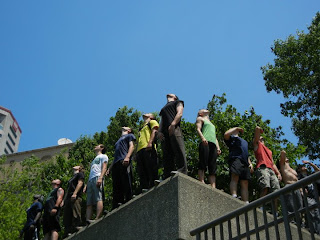 I used to think that I had a very solid personal definition of parkour, but this workshop shook it up a little and really forces me to recognize or at least reconsider the fact that one of the core values of parkour is about understanding and overcoming risk, or rather, perceived risk. How many of you reading this considered training parkour but avoided it because of the fear of injury? Any active traceur has heard this from a friend: "Parkour looks so cool and fun but I would just hurt myself." Even with all our mats and safety equipment, we still hear this excuse all the time. But attempting parkour at all is the first step toward the road of conquering one's personal fears and learning to take risks, both physically and mentally.

If you're ready to take the first step, come check out a Parkour Connections class or sign up for a workshop!