"The Stride Revolution" (from TK17)

...we gladly received, and we happily re-publish:

Every traceur understands that parkour is a process and a mindset, not a list of movements you can memorize and check off.  An athlete who just goes out and masters ten or fifteen different techniques from Youtube videos isn’t really one of us, we say.

Yet even as we say it, it’s hard to stop that list from rattling around inside our own heads.  We all know it … it goes something like:

… and the more level-headed of us don’t forget to include running at the top.   But whether level-headed, borderline, or just plain PK-crazy, nobody seems to be including a little technique that a few young traceurs in Cambridge like to call “the stride.” 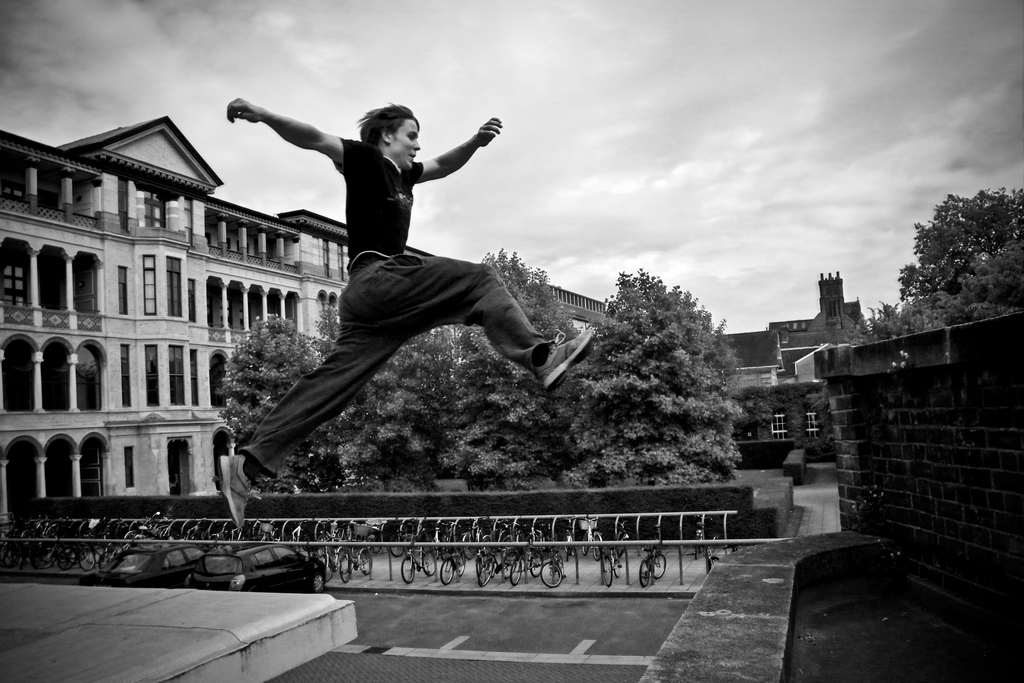 It’s a relatively recent invention, at least the way they’re doing it.  Not quite running, not quite jumping, and not quite a one-legged precision, it’s turning out to be one of the most powerfully explosive and efficient movements the parkour world has ever seen, eating up distances hitherto reserved only for running gap jumps and leaving even the swiftest vaulters in the dust.  It’s incredibly adaptable, too … in the recent Ampisound video “Professor Longhair, Big Chief,” Kie Willis and Phil Doyle stride up, down, and forwards on rails, benches, pillars, walls, and rooftops, all without the slightest break in momentum.

With results like those, you’d think that every traceur in the world would be scrambling to get outside and start striding, but the buzz so far has been inexplicably nonexistent.  It’s not catching on, and it should—in fact, I propose that the stride deserves a place in every traceur’s toolkit, right alongside those classic French techniques that come to mind so easily.  Blasphemy, I know, but it’s blasphemy I’m prepared to defend.

To some extent, this objection has merit.  It’s true that the conceptual core of the movement is just that—do a running jump, and follow it up with another one, instantly.  But for one thing, similarity doesn’t stop us from differentiating wall runs and tic tacs, and for another, there’s a lot of technique to the stride that isn’t really found anywhere else, making it a distinct movement in a class all its own.

With ordinary running, the focus is on rhythm, lightness, and speed.  Each footfall is essentially identical, and whether you’re running heel-toe or ball-heel-ball, you lift your leg upwards from the ground and thrust the knee forward, allowing the lower leg to flash ahead to the next point of contact.  And with ordinary running jumps, the focus tends to be on throwing your arms forward for the takeoff, tucking in midair for control, and reaching out with both legs to absorb and cancel as much momentum as possible.

The stride, on the other hand, requires a completely different approach.  Once you get past the fact that your feet are moving left-right-left-right, most of the overlap with running disappears.  Your only two priorities are hitting your next step precisely, and maintaining your forward momentum.  Footfalls can change from step to step (typically, you’ll land on the ball when descending, and smoothly roll from heel to toe when rising or moving horizontally), and there’s no point in trying to find a consistent rhythm when the next five walls might be at radically different distances from one another.

Also, while strides frequently involve a normal running motion, they just as often require you to let your rear leg lag behind.  By keeping it back and keeping the knee fairly straight, it becomes a counterweight that you can swing forward to pull yourself to the next obstacle.  Naturally, that means no tucking between steps (arms don’t tend to swing together, either), and the typical sink-and-deep-bend that traceurs use to cancel momentum is completely absent, since the whole point is to keep moving forward.

Objection #2: It’s unnecessary … I can cover those obstacles with REAL parkour movements!

Again, a legitimate concern—all of the obstacles in Professor Longhair can (and have been) tackled with more traditional movements like single jumps, arm jumps, and vault combos.  But in each case, the end result was much slower when the traceur relied on his or her hands than when Kie and Phil used their feet.  Classic techniques tend to involve a lot of up-and-down motion, as traceurs transition from the ground to the air and back, and they rely more heavily on arms, which are inevitably weaker than legs.  That means the classic techniques take more time and energy—time and energy that are translated into speed when you simply glide right over everything in your path.  For a true traceur, the choice is obvious.

Plus, it’s important to remember that there is nothing sacred about the classic techniques.  They’ve stuck around because they’ve proven to be highly efficient and adaptable to a wide range of obstacles, but in the end, they are only as good as they are useful.  David and the Yamakasi were no older than the Cambridge traceurs when they developed them, and arguably had less knowledge about movement, since this generation has benefited from the successes of the past.  The high-level practitioners who are using strides (and they are many—see the videos of Danny Ilabaca, Blane, Livewire, and the Vigroux brothers, to start) know that what matters is the end result, and if strides do that job better, then they become your best tool.

Objection #3: Strides look like they put a lot of stress on the legs … they look like they’d be easy to mess up … they’re dangerous and untested.

Untrue—they’ve cropped up here and there for years, albeit not to the level shown in Professor Longhair.  And while single-leg techniques definitely have greater potential for injury, that doesn’t necessarily make them any less safe to a traceur who is willing to put forth the effort in conditioning and careful progression.

As it stands now, no one can speak to the safety or dangerousness of strides except for the tiny handful of traceurs who are practicing them regularly, most of whom seem confident enough to use them on rails or at height.  Just like with the original parkour moves, the only real way to be sure is to see what happens with time—how well do practitioners hold up after weeks and months and years of training them?  To answer that question fully, we need to have the whole parkour community involved, to have all of our gurus and experts swapping ideas and looking out for each other.  We need you, in other words—we need you to think about it, and experiment with it, and see if there’s a way for you to do them safely, so that you can share your experiences with the rest of us.  Until we give it a shot, we’ll never know—just as no one knew whether an arm jump could be done until the founders worked up the strength and the courage to try.  This doesn’t mean we should rush into it, and it doesn’t mean it has to be done recklessly.  But if we’re really searching for the fastest way—if we really mean it when we call ourselves traceurs—then we owe it to ourselves to take a crack at it.

Objection #4: So what?  Let everyone else try … I’m not interested.

In the end, every traceur will make his or her own choice on this issue.  As always, you are in control, and there is no one right or wrong answer to a given obstacle.  But if I haven’t convinced you yet, consider this one last thought before you make up your mind.

In parkour as it exists today, we use our hands for nearly everything.  We place them on the ground for PK rolls, scrape them bloody for wall runs and arm jumps, give them blisters with underbars and lachés, and slap them onto every surface imaginable for vaults.  Our feet, on the other hand, barely go beyond what they’d do if we were playing football or basketball or any other sport.  We use them to run, to jump, and (every once in a while) to stick a precise landing, and that’s about it.

Part of what drew me to parkour in the first place was its promise of completeness, the way it seemed natural and balanced in a world that tries to separate us from our Paleolithic bodies.  Yet the founders, for all their hard work, did not leave us with a complete discipline.  They never intended for parkour to stop growing and changing after a few years.  We are unbalanced, relying on hands and arms while our stronger feet and legs languish.  Strides can help fix that imbalance, returning footwork to a place of equal importance with dexterity, making us truly rely on our whole bodies once more.  When I watched Professor Longhair, I felt once more that sense of wonder and excitement that I’ve lost through my years of practice.  I felt that there was something new, something that could take my movement to a whole new level, that would be difficult and frightening and ultimately rewarding in a way that nothing has been in five years.

I felt, in other words, that there was a new obstacle before me, and I yearned to get started conquering it.  If you feel the same way, then it’s time to shake things up—time to take a great stride forward with a new style of training.

Permalink Reply by kingtheking on September 9, 2010 at 3:00am
yah your right, I contradicted myself... lol

FINAL ANSWER: the stride isn't necessarily a seperate technique, its just technical, like another type of running.... I guess... idk... *facepalm* =/

Permalink Reply by Bay Area Parkour on September 7, 2010 at 11:15am
...read the comment to this featured video, which -btw- shows the cat-to-cat "descend" that David Belle performs in the video you posted.

But in this article he's really talking about them, more than himself.

Bennett Parry is now a member of Bay Area Parkour
May 21
Welcome Them!